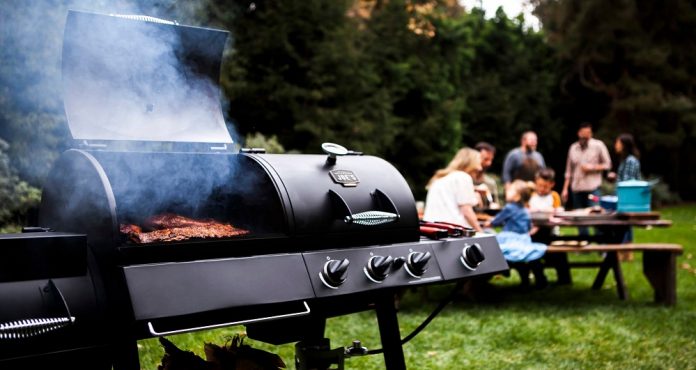 Anyone who is searching for the best smoker grill combo doesn’t have to look very far. There are many models that we came across that we think would make consumers happy. So many, in fact, that it was difficult for us to choose just a few of them. We found that to be quite surprising because just a few years ago these grill/smoker combinations were quite difficult to find. We’re glad that has changed and now all of our readers have access to these great grills. Now, we’re going to do a deep dive into the models that we think are the best of the best. Smoker grills that we feel get the job done and get it done well.

Note: We may earn a small commission when you buy through links on our site. Learn more

This quality model is designed to put a professional smoker/grill combo into the hands of the average consumer. This is a product that’s designed to be easy to use and to give the consumer the power they need to take their smoking and/or grilling to the next level. Although this model weighs over 120-pounds, so it’s not as easy to move around like some other grills, it’s a model that we feel many of our readers are going to want to set up in their backyard.

This smoker grill is 40.7-inches by 26.7-inches, by 53.1-inches in size, and is made out of high-quality and very durable steel. It’s a product that’s not only capable of grilling and smoking, but can also be used for baking, roasting, barbecuing, and even braising food. It has a large grilling area that’s approximately 575 square-inches—which is large enough to cook four chickens, four racks of ribs, and over twenty burgers easily.

Another thing that we’d like to mention about this grill is that it has a unique set-it and forget-it cooking system that makes it easy enough to be used by just about anyone. All the user has to do is fill up the hopper with wood pellets, turn on the grill and set the desired temperature, and then let the smoker/grill do all of the rest. The grill feeds the smoker with wood pellets using an industry-best drivetrain and variable speed fans stoke the fire, all while circulating heat around the food.

Other features found on this model include voice control using a compatible Alexa device, and a WiFi connection that allows the consumer to control the grill via an App. All of these features make this model one that consumers are going to appreciate. 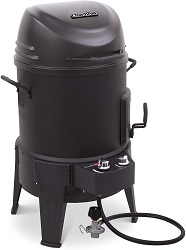 This product also has a side-mounted stainless-steel smoker box that is easy for the user to access. The user can add wood chips to this unit without having to open the lid. This product is 36.2-inches high, and 23.4-inches wide, and weighs around 50-pounds. It features two side-mounted carry-handles that make the product easy to move from one location to the next, and it has a long propane hose that allows the user to keep the propane tank a safe distance from this unit. And because it has temperature control from 9,000 to 18,000 BTUs, the consumer has plenty of control over how they grill, smoke or roast their food.

Royal Gourmet is a company that has made quite a few products that we have liked, so it should be no surprise that we like this smoker and grill combo from them. This model is well built, cooks well, and is easy to set up. It’s also just the right size coming in at 55.1-inches high, 48.4-inches wide, and 27.2-inches long. It is a grill that has a large cooking area of 800 square inches. That’s a 438 square-inch porcelain-coated wire grates, a 179 square-inch chrome-plated warming rack, and an offset smoker that provides an additional 183 square-inches of cooking space.

Of course, the size of this grill isn’t the only thing worth talking about. It also has the features that consumers need in order to get their smoking or grilling done. These features include lifting handles that can be used to raise or lower fire pans to one of two different levels; an easy-to-use access door on the side firebox; two wheels that make the smoker more portable; and, porcelain wire cooking grates. This model also features two adjustable dampers that make controlling smoke and heat in this unit a lot easier than it is with models not equipped in the same way.

All of these features, along with others, including a built-in temperature gauge and an easy-empty ash tray, make this a smoker and grill combo that we feel a lot of our readers are going to want to use. It’s a model that doesn’t have a large price tag, but still has many of the features of professional models.

This product is another one that caught our attention and forced us to pay closer attention to it. This model is made by Z-Grills and it’s a smoker/grill combo that’s just recently received an upgrade. It’s a model that’s been equipped with a new digital control board that allows the grill to maintain a cooking temperature from 180 degrees to 450 degrees Fahrenheit. That makes it great for low and slow smoking, or high-temperature grilling.

This is a product that can be used to grill, sear, BBQ, roast, braise, or smoke. It’s also a grill that can smoke for about 20-hours on a mere 20-pounds of wood pellets. This grill is approximately 45-inches by 28-inches by 49-inches in size and is made out of a durable stainless-steel material that allows it to hold up to thousands of hours of smoking, grilling, or char-grilling.

Because this system uses a wood pellet hopper and a drivetrain auger, it’s capable of just about operating itself—well, almost. It’s about as hands-free as just about any other smoker grill combo unit. It’s also equipped with a drip tray that prevents grease from coming off of the food and putting out the fire or spoiling the wood pellets. This feature also makes it easy to clean once everything has been cooked. Just another reason why this is an easy-to-use model that people are going to love to use.

Can’t Find What You’re Looking For? Check these suggestions:

A Guide To Buying The Best Smoker Grill Combo

Many people love both smoking and grilling, but they don’t want to have to purchase separate appliances to do both. Now, thanks to the many smoker grill combo units that manufacturers produce, people don’t have to wait until they can afford to buy both models individually. No, they can now buy one appliance that does everything—all they need to do is find the one that’s best for them.

And this is where the rub comes in. It isn’t always easy for the average person to decide among all of the different smoker/grill combination units which one is right for them. That is why we’ve decided to swoop into the rescue and create this guide. It’s our hope that this guide will help all of our readers buy not just the smoker/grill models that are the best, but the ones that are the best for them.

The Size Of The Cooking Surface

One of the first things that consumers are going to want to consider is how much cooking area they need. Some smoker/grill combos only have a grill surface of under 500 square-inches, while others have much larger cooking surfaces—some with a cooking area of up to 1,000 square inches.

It’s also worth noting that many manufacturers list their total cooking space in their advertisements when that’s not representative of the total cooking grill space. For example, one grill manufacture lists their grill to have a total of 800 square inches of space, but when the consumer looks closer, they’ll notice that only 438-inches of that space is grilling space. The balance is dived between a 179-inch warming rack and a 183-inches of smoking space.

The Weight Of The Grill/Smoker

Another thing that the consumer might want to consider is the weight of the smoker grill combo. Some of the models manufactured nowadays are very easy to move and weigh only 50 to 75-pounds. Other units, on the other hand, are quite heavy and can weigh over 150-pounds. Obviously, if the consumer wants a unit that they can take with them, then this is a bit heavy. However, if the consumer is just going to keep it in their backyard, then it probably won’t be a big deal.

The Types of Smoker Grill Combos

The next thing to give some thought to is how the smoker/grill is powered. Is it a charcoal model, a propane model, or an electric model that uses wood chips or pellets? The model the consumer chooses will depend on their needs. Each of these different types of cookers has its pros and cons, so it’s up to the consumer to decide which one is right for them. The consumer should keep in mind that if they choose a particular type of smoker/grill, then they’re going to have to make sure that it uses a fuel source that’s easy for them to use. For example, a person who doesn’t have any outdoor outlets might not want to choose an electric model.

Think About The Unit’s Controls

It’s also important for the consumer to think about how the smoker grill combo is controlled. Some models are strictly manual, so the consumer will have to start the fire, tend to the fire, and make sure to keep track of temperature, smoke levels, and cooking time. Other models, however, are easier to control and are equipped with a circuit board that will automatically light and maintain the fire. These circuit boards will maintain proper temperature and can even alert the user when the food is done thanks to timers and/or thermometer probes. These models make grilling/smoking a lot quicker and easier than with traditional manual models.

Other Features Worth Thinking About

As we meander towards the end of this guide, it’s important that we take a few moments to list some of the other features that consumers might want to think about before purchasing a new smoker grill combo. On modern smoker/grill units, there are just too many different configurations for use to get into detail with each one, so instead, we’re going to list some of these features below. It’s up to our readers to decide which (if any) of the following features is useful for them. With that said, let’s take a quick look at them before we end this guide.

ThePoolAdvisors.com is a participant in the Amazon Services LLC Associates Program, an affiliate advertising program designed to provide a means for us to earn fees by linking to Amazon.com and affiliated sites.
Contact us: contact@thepooladvisors.com

Best Rocks For Inside Fire Pits of 2022 – Reviews