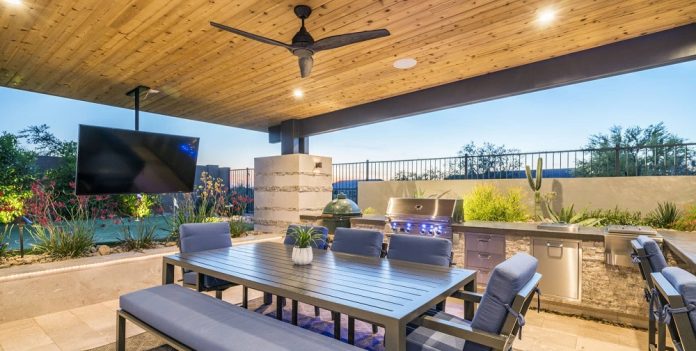 Outdoor fans come in a myriad of different shapes and sizes. There are ceiling fans, misting fans, and even high-velocity outdoor fans. They also come in a variety of different sizes and price ranges as well, so the consumer should definitely do their homework before buying one. To help our readers with their quest, we’ve decided to review what we consider to be the best outdoor fans available. So, we searched far and wide and sought out the fans that we thought would work best for our readers. Once we’ve found them, we’ve reviewed them and paired them with a handy buying guide. Now there’s no excuse fr anyone to not have the best outdoor fan available.

Note: We may earn a small commission when you buy through links on our site. Learn more

The first outdoor fan we’d like to review is this one. This model isn’t a misting fan nor is it a ceiling fan. Instead, it’s a wall-mounted fan that can be easily mounted to the side of a building or the frame of a gazebo with the use of its adjustable wall-mount. This is a fan that can’t be used in full-exposure of weather but is weather-proof up to IPx4. That allows it to hold up to indirect splashing from water and high-humidity conditions. This product has a full-sealed and lubricated motor that allows it to hold up to outdoor use quite well.

Another thing we’d like to discuss with this wall-mounted fan is that it has three adjustable speeds that can be easily changed using the pull-chain. It also features curved fan blades that maximize the amount of air the product moves through a room. This fan can also be easily transformed into a misting fan if the consumer purchases the optional Misting Kit that’s sold separately. Other features that can be found on this model include a powder-coating on the fan’s aluminum blades and a corrosion-resistant finish.

All of which makes this 18-inch fan one that we feel a lot of consumers are going to enjoy using day in and day out. It’s also a fan that’s reasonably-priced and is well worth its price-tag. And if the 18-inch model isn’t large enough for the consumer’s needs, they can always purchase the 20-inch model instead. We think it’s a very nice model worth checking out.

Going in a completely different direction from our review of the wall-mounted outdoor fan at the top of our list, we’re now reviewing a ceiling fan model. This is a ceiling fan that can be used both indoors and outdoors and features five ETL damp-rated blades.

This model also features a traditional pull chain that allows the consumer to turn it on and off quite easily. This is a 3-speed fan with a reversible motor that can be run during both the summer and winter months. And because it has 52-inch blades, this model does quite a good job of pushing air around.

Even though this outdoor ceiling fan isn’t equipped with a light, it is equipped with a tri-mount mounting system that we feel most users are going to appreciate. This system allows the consumer to choose from one of three different mounting options: close mount, down-rod, or angled installation.

All of these features make this ceiling fan one that’s easy for consumers to use indoors or to use in a room that’s partially open to the outdoors. It just has a beautiful oil-rubbed bronze color and is perfect for medium to large-sized rooms.

This fan is just another example of the wide variety of different options consumers have when they choose among many of the outdoor fans. It’s not only a functional fan but also a good looking fan that any consumer would be proud to use in both their indoor and outdoor spaces.

Once again we’re going to pivot from one type of outdoor fan and immediately head towards another type. Unlike the ceiling fan that we’ve just reviewed, this portable 16-inch fan doesn’t have to be mounted in place. It can be easily set up on the floor just about anywhere and it has the features that consumers look for when searching for a new outdoor fan. This is a rechargeable fan that takes about 3-hours to fully charge, thanks to its lithium-ion battery, and once charged, it can run for anywhere from 2 to 18-hours depending on the fan’s speed.

This battery-powered fan also has an adjustable head that can be tilted up to 120-degrees, so the consumer can direct air where they need to direct it. This fan is approximately 18.7-inches high, 20.9-inches wide, and 8.7-inches deep. This model is equipped with a metal fan blade that’s capable of delivering a maximum of 2,500 cubic-feet-per-minute of airflow. That’s a lot of air for a fan to move. This model also has a water-resistant design that conforms to IPX4 standards. This means that the fan can be used outdoors, but it still shouldn’t be used out in the rain.

Another thing that we appreciated about this fan was that it was relatively quiet. All of its features make it a great outdoor fan for outdoor work sites, camping, barbecuing, or just about any other scenario where a person needs a portable fan. This is a model that is reliable and will deliver the airflow a person needs when they need it.

The last outdoor fan we want to talk about is the Misto 7050 Outdoor Misting Fan. Although this fan might be at the end of our list, it still occupies a place in our hearts. That’s because while we don’t believe this fan is the best outdoor fan available, we do think that it will serve some people’s purposes quite well. This is a fan that can produce a misting breeze that is capable of reducing air temperature up to 25-degrees. It’s also a fan that has a 90-degree pivot to allow the consumer to choose the direction of the airflow, and automatic louvers that allow the fan to sweep a wide area.

The misting kit on this model can also be quickly removed, so the consumer can clean it easily. And because this model has three different speeds, the consumer can choose how they use this fan in their outdoor space. Other features that can be found on this fan include additional nozzles that allow for low-mist operation, a 3-prong ground plug with inline GFCI, and a standard nozzle attachment that allows a garden hose to be easily hooked up to it.

Taking all of its features together, it’s easy to see how useful this fan is going to be for a lot of people. It’s a great fan to place on a deck, patio, or any other outdoor location where it can have access to an outdoor electrical outlet and a garden hose hookup.

Can’t Find What You’re Looking For? Check these suggestions:

A Guide To Outdoor Fans

Now that we’ve reviewed some of the best outdoor fans that we could find, we would like to take a few moments to give our readers the information they need to choose a fan for themselves. In this guide, we’re going to cover a few of the things that consumers should look for when choosing a fan for their outdoor spaces to ensure that they do indeed buy a fan that fits their needs.

Step One: Choose A Type Of Fan

One of the first things that consumers need to think about is the type of fan that they need. Some people need a ceiling fan for their gazebo or porch, while other people might need a wall-mounted fan, a floor fan, or even a misting fan. Deciding the type of fan they need will determine how the fan is used. Ceiling or wall-mounted fans need to be fixed to a single location, while floor or misting fans can be moved around as needed—or as far as their electrical and/or garden hoses allow them to go.

The next step to choosing a great outdoor fan is for the consumer to find out whether they need a damp-rated or a wet-rated fan. To help our readers determine their needs, we’re going to list three of the most common fan ratings available on fans. These ratings include Dry Rated, Damp Rated, and Wet Rated fans. Let’s examine each of them to see how they should be used and where they should be used.

These fans can only be used indoors and can’t be exposed to any type of moisture. Inside of the house they can be used in bedrooms, living rooms, dining rooms, or in finished basements. They should never be used in bathrooms or other locations that have excess moisture.

These fans are designed to be used in covered locations that don’t expose the fan to direct moisture. This means no direct exposure to rain, sleet, or snow. However, it can handle general dampness in the air, so it can be used in bathrooms. These fans can also be used in carports, kitchens, screened porches, and covered patios.

Wet-rated fans are more expensive than other types of outdoor fans, but they can handle rain, snow, and ice easily. They can also be used in areas with salty breezes. Some of the locations where these fans can be used include gazebos, exposed decks, and verandas.

Step Three: Consider The Speed Of The Fan

This section is specifically for outdoor ceiling fans, but it might inform our readers of some of the things that they need to think about when choosing a new fan. First, we’re going to take a look at what size fans are needed according to room size and height, and then we’ll take a look at how blade span and CFM rating determines wind speed.

The following measurements are for 8-foot ceilings—which are considered to be the standard ceiling height.

The next thing that the consumer is going to want to think about is whether they want AC or DC fans. Both of these types of fans have their pros and cons. DC fans use less electricity than AC fans and are considered to be more environmentally friendly fans. For ceiling fans, AC and DC motor fans both connect to the consumer’s electrical system. Portable DC fans often use a lithium-ion based battery for power.

Additional Features To Think About

Now that we’ve covered the basics of choosing an outdoor fan, it’s time to think about some of the other things that consumers might want to consider. One of the biggest considerations that the consumer is going to want to consider and that we haven’t listed here is how the fan looks. A fan should have a nice aesthetic that fits in with space it’s being used. However, that’s not the only consideration the consumer needs to think about. Below are some more things that our readers might want to consider before purchasing their next outdoor fan.

ThePoolAdvisors.com is a participant in the Amazon Services LLC Associates Program, an affiliate advertising program designed to provide a means for us to earn fees by linking to Amazon.com and affiliated sites.
Contact us: contact@thepooladvisors.com

Best Rocks For Inside Fire Pits of 2022 – Reviews